What made you want to do a show that uses Morecambe and Wise as the inspiration?

Jonty (Eric): To be honest it all came about through other people seeing what we had from a five minute sketch and saying ‘you should do something with this’.

Ian (Ernie): It’s only when we sat down and talked ab 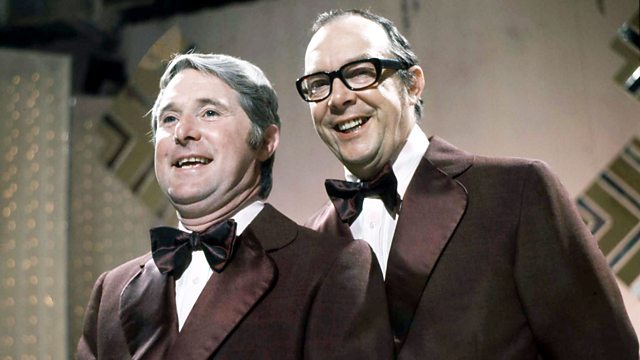 out it that we decided that if we were going to do something, it had to be a play that looked at the relationship between Eric and Ern.

Jonty: It was a real voyage of discovery for both of us. I was a massive Morecambe and Wise fan and had seen and read just about everything they’d ever done or had been written about them.

Ian: Yes, it was Jonty’s brilliant impression of Eric and his knowledge of Morecambe and Wise that laid the foundation to everything that followed really,

How did you both meet and how did the pairing for this show happen?

Jonty: And I was an immature student.

Ian: Despite Jonty being two years ahead of me and me being a lowly first year we became the best of friends and have remained so ever since.

Jonty: The pairing happened for that five minute sketch which we performed at the host club for the  Stage Golfing Society, of which we are both members. Some fool asked me to do Eric for the show and I said “yes, but I’ll need a Little Ern, I looked across the bar and there was Ian with his hair and short fat hairy legs”

Ian: Then six years later they asked us to do it again, but this time we wrote some material in the style of M and W and It went down so well we realised two things - People believed were good enough to portray them and that perhaps we could write something about them as well.

How long have you been doing your Eric and Ernie act and what different shows have you done in that time? 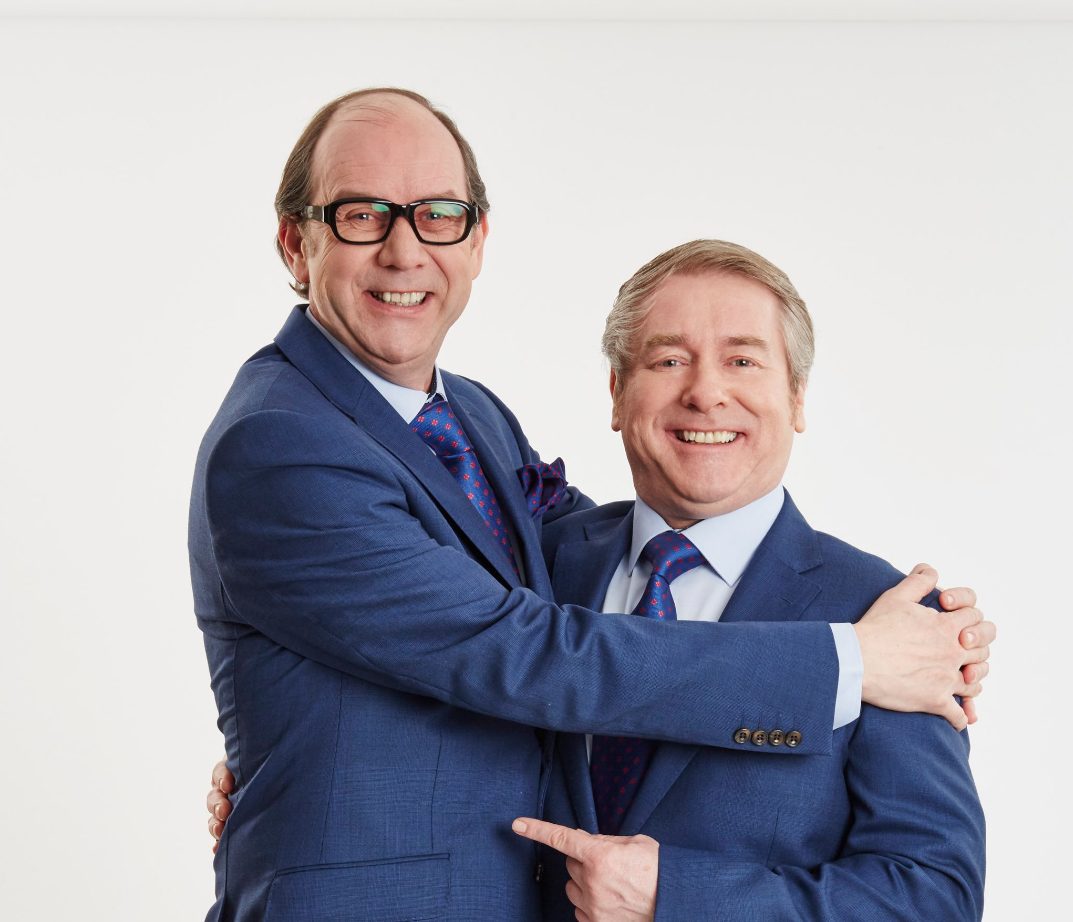 Ian: We’re both what you might describe as ‘jobbing actors’. We have both had good solid, varied acting careers in theatre, films and TV. From Chris Hart in Family Affairs to Roy Piper in Thin Ice on BBC2. Also doing a lot of comedy with  Armando Ianucci amongst others. The last TV thing I did was playing Mr Hardcastle in Mr Selfridge.

Jonty:  Yes, I was a regular in Minder, 3 series of All About Me with Jasper Carrott also working with Lennie Henry. Plus many other TV and theatre roles. Most recently may have seen me in Peaky Blinders.

How would you describe what you do and how does it make you feel when you do it?

Jonty: Well, what we try and do is get the audience to believe that for two hours we are Eric and Ern - and no one knows more than we do what a tall order that is.

Ian: Jonty always said ‘we’re sticking our heads above the parapit and hoping no one shoots us down’ and they haven’t yet. It’s gone from Jonty doing an impression and then growing into both of us doing a portrayal of two working class lads who ‘made it’ in comedy.

Jonty: And there’s no better feeling in the world than making people laugh, but to make them laugh as Morecambe and Wise….It’s joy to perform as them. They were so beloved by the public and we feel that affection when we’re doing the show.

Ian: It’s special. And it’s us, as it was them, as a duo, a double act, making them laugh - together.

What can you tell us about your show An Evening With Eric and Ern?

Jonty: It’s a real celebration of the comedy of Morecambe and Wise. You’ll see some of their most loved sketches along with some you may not be so familiar with.

Ian: Plus some new material by us in the style of Eric & Ern. We also have the brilliant singer Becky Neale with us. We gently rib her as Eric and Ernie would….. plus a few surprises.

Jonty:  It’s real family entertainment, with good old fashioned belly laughs at the silliness and brilliance of Eric and Ern - as it was with all the M and W shows. We love it when there are children in the audience laughing along with their Mums and Dads.

Ian: Of course they’re seeing this comedy for the first time and love it as much as we did when we were kids. I’ve no idea why the parents are laughing ‘cos they have seen some of it before!

How do people react when they see you on stage in character? 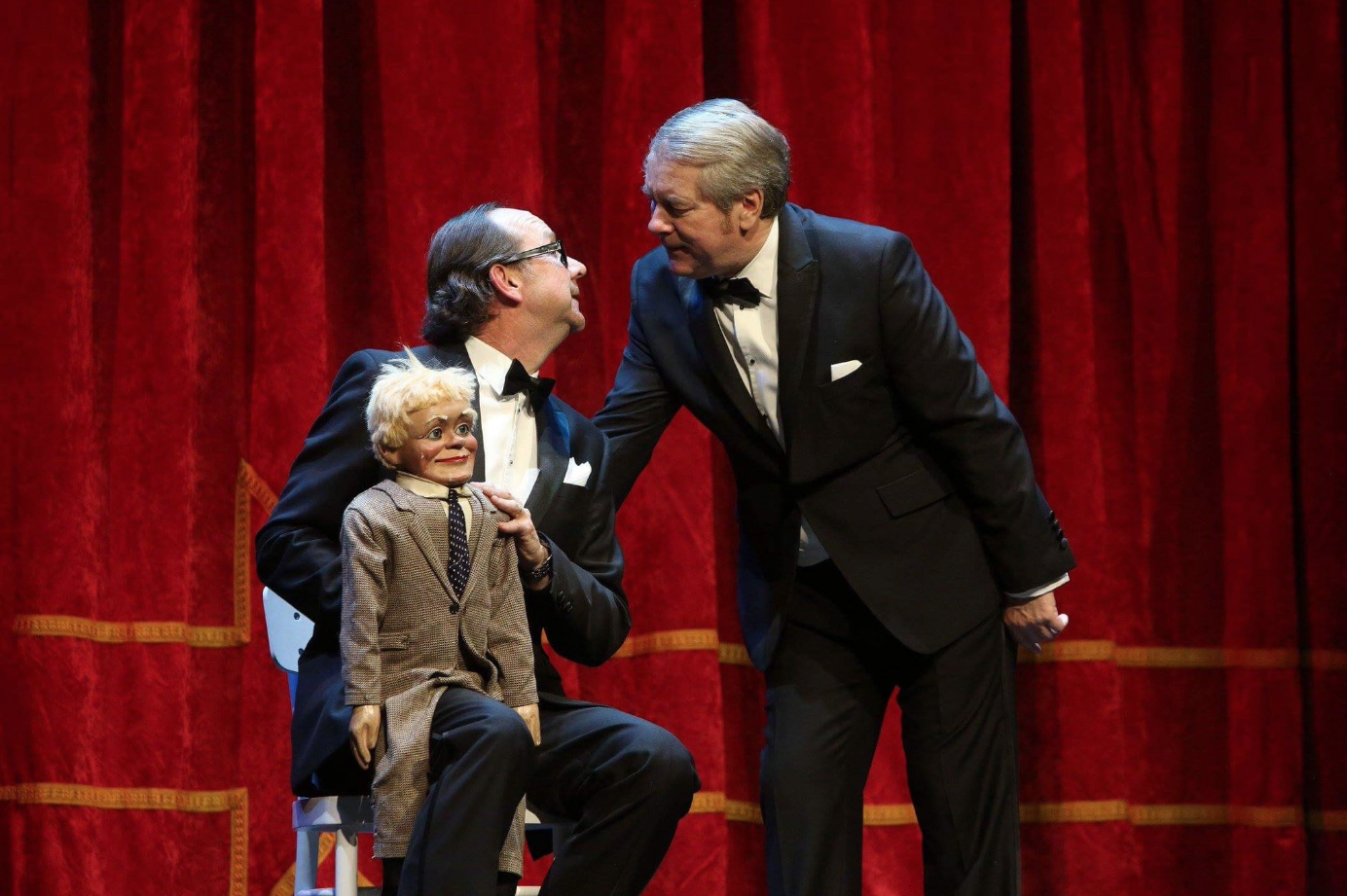 Ian: I think we forget the physical and vocal likeness we have to Eric & Ern. For the first few minutes the audience are slightly shocked, you know, they’re still taking it in, tuning in almost, I guess

Jonty: But then they get swept away and just enjoy the great comedy of M&W. We have had some lovely comments. From people saying ‘ ‘We forgot that we weren’t watching the real Eric and Ernie’ to ‘Thank you for bringing them back to us - if only for a couple of hours.’

Ian: I think also, there is a huge emotional connection to M and W. As soon as they see us and hear the music, they’re transported back to a time that they watched them with their nearest and dearest.

Jonty: A lot of people are in tears at the end of the show. Which is a shame really ‘cos its meant to be a comedy!

What makes Morecambe and Wise so special?

Jonty:  I think the fact that they were so close, performing together from the age of 13. They honed their skills for over 20 years before they really made it big in their 40’s. That friendship and closeness gave them their unique talent.

Ian:  It was also their relationship off and on stage which gave them their huge success. They were so funny together, they trusted each other. There’s a chemistry between them that you can’t fake. It has to be real, otherwise the audience can see if it isn’t.

What did their humour and comedy shows have that you think is missing in comedy these days?

Jonty: They were just so funny, the years together. The runnings gags, Ernie’s wig, Eric’s glasses. Their roots in variety with song and dance. The innocence of their comedy.

Ian: They had such broad appeal. Mums, Dads, Children and grandparents -  three generations laughing at the same comedy. Written of course by the late great Eddie Braben. There is nothing like it on TV today - and I’m not sure there ever will be again.

How does it feel for you to be able to give people a taste of such amazing comedy from such great legends? 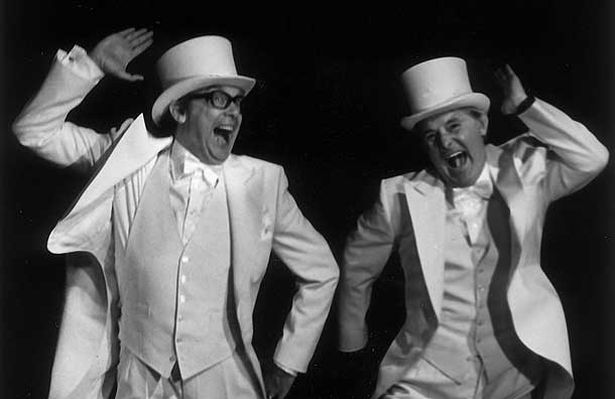 Jonty: It’s a huge honour to portray them and shine a light on their huge talent. We take it very seriously and feel a huge responsibility to represent M&W in the right way.

Ian: You know, going to the theatre its a two way street. The performer gives out all they can and sometimes it doesn’t come back. In this show we literally bask in the love and affection coming back from the audience. It’s amazing.

What similarities are there between yourselves and Morecambe and Wise?

Jonty:  Well, I’m bald and Ian’s got short fat hairy legs! But seriously our friendship is the key really. Knowing each other for over 30 years. We really best mates, even before our journey of performing as Eric and Ernie.We trust each other implicitly and always look out for each other on and off stage. You cannot fake that closeness and It was the same for Eric and Ernie.

Ian: Yes, a few we’ve discovered a few things over a period of time. Eric wasn’t the most organised and Jonty’s brain can sometimes be best described as chaotic and like Ernie, I also have a padlock on me wallet. No, Its more about the relationship we have and they had really - both very different people but ultimately like brothers with complete trust in one another.

Jonty: It’s also interesting finding out about how they worked 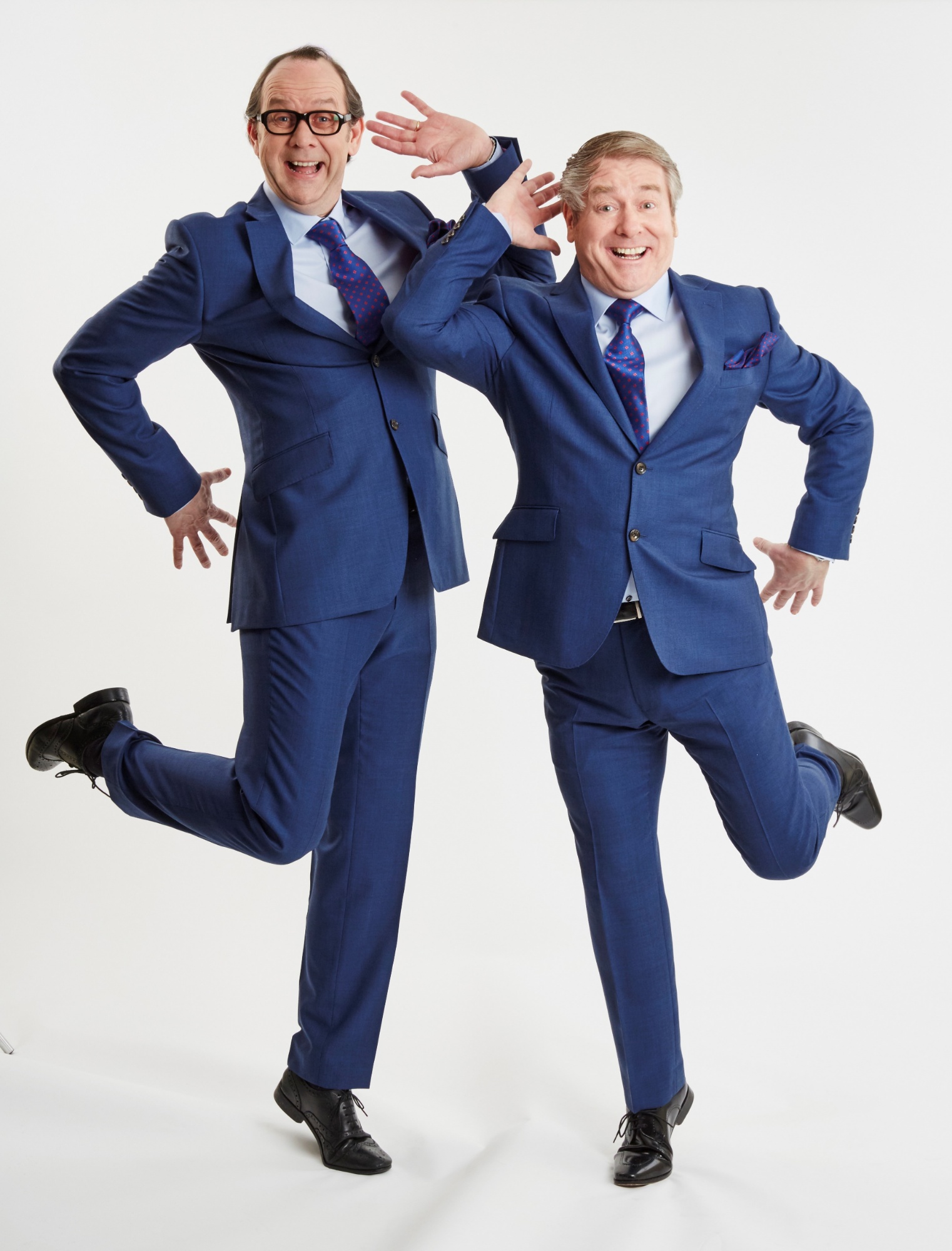 behind the scenes, how they worked on the comedy. Worked being the operative word. They rehearsed hard and it was a real joint effort, with Ernie contributing as much as Eric.

Ian: Yes, and we’re the same. I think I’m a bit more organised and get things down on paper. I’ll write something and the Jonty will ‘Ericify’ it and make it funnier. Bit like the boys. They both brought different things to the rehearsal room but it was the sum of what they did together that was key. Together with the writing of course. But it was the two of them as it is the two of us.

Jonty: There’s a lovely interview where they’re asked about this and Eric says “Well, I make him laugh and he makes me laugh”

Ian: And that above all else for us is the key because we are exactly the same. When we’re trying new material if we both laugh at the same time - we know it’s going to work.

What do Eric and Ernie’s families think of your show and what impact has that had on you?s

Jonty: We have been very lucky to have had amazing support from the Morecambe family and the estate of Ernie. We treasure our relationship with them. We always try and run everything buy them before we do anything as Eric and Ernie. It’s vitally important that the families are happy with what we are doing and how we are portraying the boys.

Ian: Yes, to have there ‘approval’ is paramount and it’s a question we are often asked and to be able to say we have that nod makes us feel more secure in what we are trying to do.

What type of audiences do you get for An Evening With Eric and Ern?

Jonty: What’s been great is that we obviously get the die hard Morecambe and Wise fans who we love because they get everything - and sometimes join in.

Ian:  But also we are also getting young people  who maybe didn’t know Eric and Ernie initially and are brought along by parents and find they are loving the comedy just a much. Then they go home and look them up and start watching them online at home.

What are you most looking forward to about taking this show on UK tour?

Ian: Sharing the genius and wonderful comedy of Eric and Ern up and down the country. Taking them to a world of sunshine and laughter…..

Jonty: Where there is no mention of Brexit and that other fella - Donald something or other.

An Evening of Eric & Ern is with us on Wednesday 17 April. To book tickets click here.