An Interview with Mark Steel

When comic Mark Steel toured his highly successful Every Little Thing's Gonna Be Alright in 2018, his outlook was wonderfully hopeful despite the show describing when Donald Trump won the White House, the Labour Party seemed a busted flush, Britain voted to leave the EU, and his wife decided to leave him.

Now he's back on the road with a reworked and updated version of the show and he explains how it came about. “Stand-up is not like film or theatre in that it can change during the run,” Mark says. “You drop a bit here, and add a bit there, so by the end of the tour you may have a show that's different at least in parts. But the new show is still essentially about me being chipper in the face of some miserable events.”

Would it have been simpler to call it by a different name? “Well I quite Like Every Little Thing's Gonna Be Alright,” he explains, smiling. “I want to keep on with that approach, to persevere with hope when clearly every little thing isn't turning out all right.” 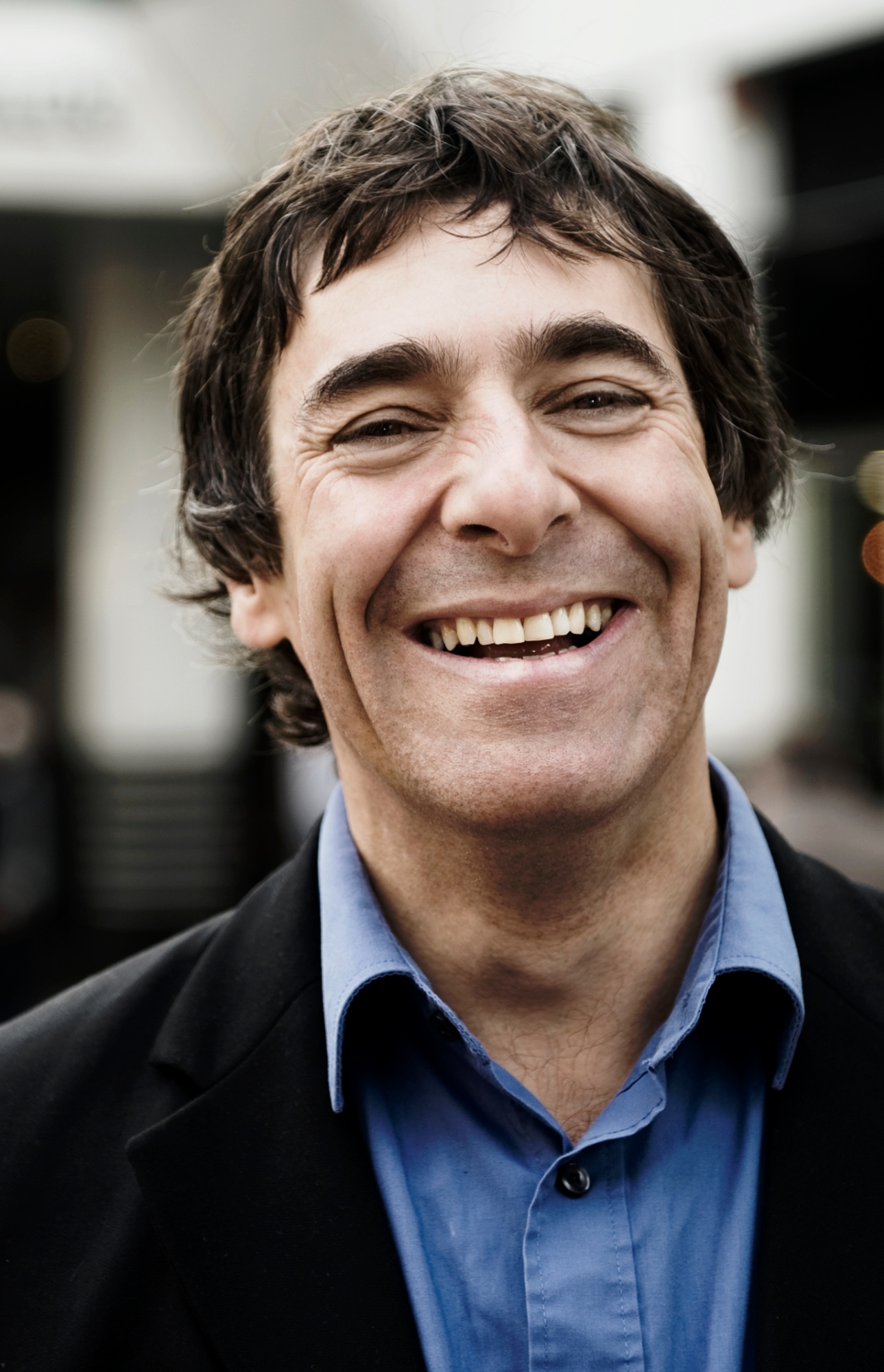 He adds with a laugh: “It may be I'll get my comeuppance – that the good Lord is challenging me, he's laughing at me before sending down the locusts. But I'm determined to remain optimistic.”

The first section of the show is political material and while Mark, a columnist for The Independent, is famously on the left, you don't have to share his views to agree with his contention that UK politics at the moment are “mental”. By the time you see him on stage, he says drily: “We could all crawling around eating maggots, for all I know.”

Some of his views may surprise you – “I don't condemn people who voted for Brexit, as some do. I don't think they're all idiots and I can see why they came to that conclusion” – and even admits to a certain regard for the Queen after learning of her disagreement with Margaret Thatcher over apartheid. “I don't wish ill on anyone, but Philip's not going to go on for ever, is he?” he says with a grin. “And if she needs a shoulder to cry on...”

And while Mark is not a cruel comic, he does like to have a bit of fun; be warned if your view about Brexit is an angry “Just get it done!” without any thought as to what that actually means. His rejoinder is: “You might as well vote to come out of the solar system.”

The show also talks about his wife of 11 years divorcing him. They underwent “mediation” to divide their financial assets and Mark vents his spleen about the process. “The way that marriage, or rather divorce, is organised in this country is mad. You're better off under some sort of Sharia system,” and then he hoots with laughter at the thought."

“In mediation, everything is brought down to the cost of things. It encourages people to be unpleasant and greedy, and it struck me that it's the same philosophy that's driven the world over the past few decades. So education, libraries, health and social care all have to have a financial worth; everything is reduced to whether it has a value that can be worked out on a calculator.”

He quipped during the first run of the show that 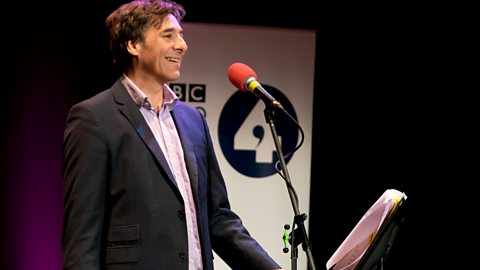 maybe he should be doing the marriage material when he was no longer bitter. Has time healed that? “I really hope there wasn't anything in it that sounded like real bitterness,” Mark says. “Most of it is an excuse for me to talk about my own stupid failings - being obsessed with sport and being completely incapable of completing the simplest task that involves anything mechanical, like pulling out the leaf on a table, or hanging a picture on a hook that's already on the wall.”

Some of his ex-wife's grounds for divorce also lend themselves to comedy: he never cut the privet hedge (not a euphemism); he hadn't trained the dog; he went on tour (he is a comic after all).

But things are good with his ex-wife. “It's all resolved now, I don't hold any bitterness at all. You meet people sometimes and 10 years on [from a divorce] they're still grumbling about it. I think maybe there should a time limit on it – maybe like a Withdrawal Agreement.”

The comic's audience is a broad church. Many listen to his long-running BBC Radio 4 show, Mark Steel's In Town, but he also has a younger following from the short films he posts on YouTube, and his amusingly waspish Twitter feed.

Twitter is both a vexation and a source of amusement. “There is not one single selection of words that you can put on Twitter that someone wouldn't go berserk about. If I tweeted, 'I'm enjoying a beautiful sunset in Dorset' I can guarantee someone would reply, 'Not so beautiful if you suffer from sunset aversion in Dorset syndrome, it's not. Have a thought for SADS sufferers, Mark'.” 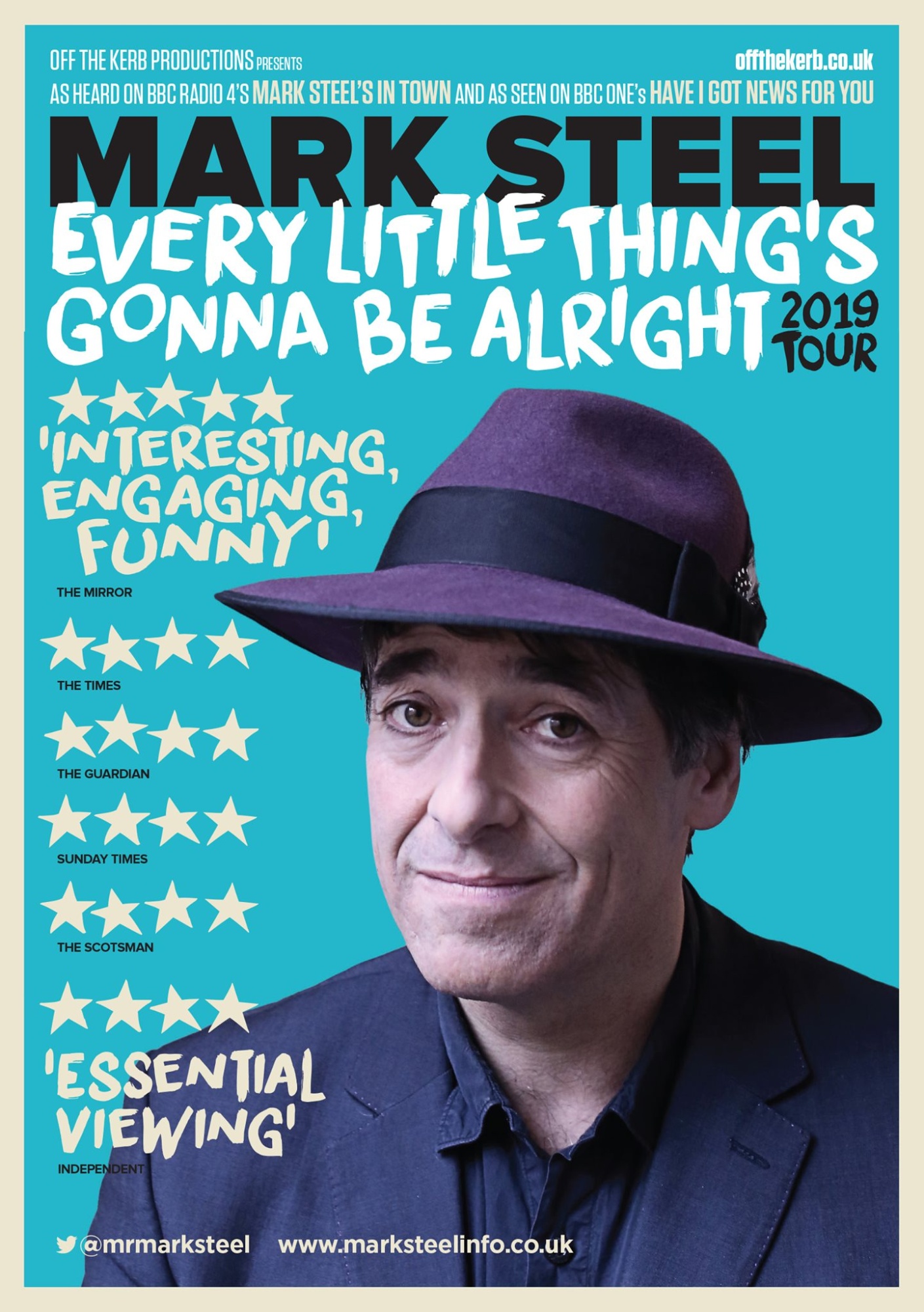 He doesn't get into Twitter spats – “You’d be there all day if you did” – but enjoys seeing “the large number of faux liberals on it moaning because someone uses the wrong word for trans people, or Benedict Cumberbatch said something offensive to otters”.

While he's on the road Mark will be working on his new book; it stems from a previous show, Who Do I Think I Am?, which was about tracing his birth parents after being adopted as a child. “I'm filling in the gaps,” he says, “and there are a lot of gaps to fill. The book is about the whole adoption thing.”

Now happily single, he lives in south London with his son, Elliot, 22, who is also a stand-up, and his teenage daughter, who accuse him of being grumpy. “I can be a grumpy old git,” Mark admits, “but I'm quite chirpy at the moment. Life is good.”

A syndicated interview by Veronica Lee

mark steel is with us on Thursday 23 April. book tickets here.